Don’t miss out on regular updates, contests and giveaways - Sign up to our Newsletter today! 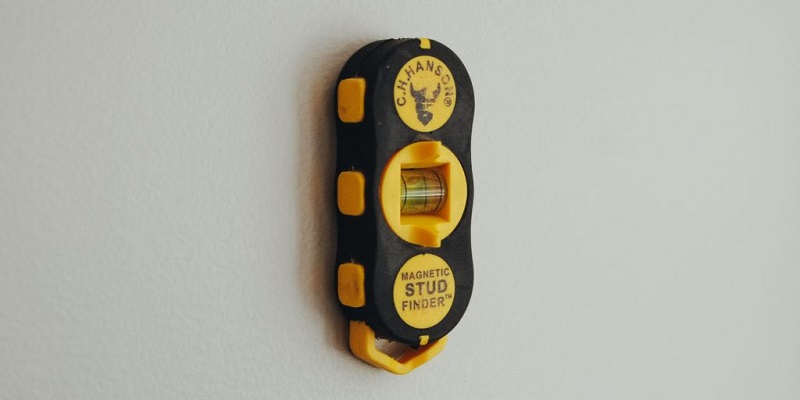 When it comes to choosing a stud finder, many opt for electronic models because they are known for being more accurate. That said, they also come with more technicalities, are larger in size, and a hefty price tag.

If you’re a traditional handyman or woman with a love for all things simple, then a magnetic stud finder may be what you are looking for.

These devices are normally simple to use, compact, and resilient, meaning they’ll stick with you for the foreseeable future.

Not only this, magnetic models come at a fraction of the price of their electronic counterparts, with many manufacturers across the world selling them for less than $10 a unit.

With all the above in mind, we’d like to introduce you to the CH Hanson 03040 Magnetic Stud Finder, a simple yet effective model designed by one of the longest running DIY companies in the world.

Designed by one of the most reputable and well-established stud manufacturers in the world, the CH Hanson 03040 Magnetic Stud Finder is not only made to stand the test of time but can also fit into virtually any toolbox thanks to its compact size.

This magnetic stud finder is perfect for professional and amateur DIYers alike. It is a multifunctional tool that is able to detect the center of a stud by using two powerful and rare magnets to find the screws and nails.

Aside from its compact size and powerful magnets, the CH Hanson 03040 Magnetic Stud Finder comes with a two way level for ease of marking and comes with a hands-free functionality.

This model does not require any batteries whatsoever and is ergonomically designed to have a soft grip in order to offer you maximum comfort. The stud finder can scan for studs as deep as one inch and is extremely accurate, give or take half an inch.

Not only this, this CH Hanson stud finder does not need to be calibrated like other electronic models. To use it, all you have to do is place it against a wall and slide along it in an S figure. Plus, thanks to the fact that it is hands-free, you won’t have to leave pencil marks on your wall.

In addition to all the above, the device is designed to withstand drops, tosses, and bangs making it a lifelong tool that anyone can enjoy having in their toolkit.

The CH Hanson 03040 Magnetic Stud Finder weighs a very small 2.4 ounces and measures 4.6 by 1.5 by 7.5 inches and can be delivered straight to your doorstep if you order it from Amazon.

What Customers Are Saying

With more than 8,000 reviews and an average rating of 4.6 stars out of 5, the CH Hanson 03040 Magnetic Stud Finder is one of the most loved stud finders in the industry to date.

Nearly all positive reviews state how easy it is to use this stud finder as it locates nails in studs quickly and efficiently. Not only this, they all described it as extremely compact, so much so that it can fit in the palm of your hand.

The rare magnets are extremely sensitive meaning that they pull the stud finder out of your hand and onto a wall when a nail is detected in the stud. Plus, the CH Hanson 03040 Magnetic Stud Finder stays put if you decide to mark your stud locations on the wall.

Other reviewers have used this device to locate lost tools behind the walls when undertaking some DIY jobs in their homes. The magnets can pick up metal tools from behind the wall without you having to go out and buy new ones.

One customer, in particular, completed their entire DIY project with absolutely no false positives. Plus, the majority of customers love the fact that you never have to replace the batteries as the CH Hanson 03040 Magnetic Stud Finder does not require any, it works purely on magnets.

Nearly all reviewers say that this stud finder is easy to use, so much so that a child could use it. In addition to all the above, using it is simple, all you have to do is move it in an S pattern against the wall and the stud finders sticks when it finds a nail.

Customers describe the CH Hanson 03040 Magnetic Stud Finder as the most reliable on the market as long as you use it on thin or dry walls. Customers who reviewed this product were so impressed that after buying it as a gift, they went online to buy their own.

What To Look Out For

While nearly 90% of customers were extremely happy with their CH Hanson 03040 Magnetic Stud Finder, others were not as flattering about the product.

While negative reviews are very few, some customers said that the stud finder would not magnetize to any nails in the studs, rendering the product completely useless.

Despite most reviewers loving the fact that it is compact and can fit in virtually any toolkit, a few people say that it is much too small to detect the nails.

Customers who left the CH Hanson 03040 Magnetic Stud Finder a negative review found that it is a simple magnet and that if you have thick walls it does not detect the location of the studs.

Negative reviews were left predominantly by people admitting to having thicker walls in their homes. Despite the fact that they could not locate the nails in the studs, the description of the product clearly states that this magnetic stud finder is for walls that are only 1 ½ inches wide.

If you think the CH Hanson 03040 Magnetic Stud Finder is the one for you, we recommend you head over to Amazon to make your purchase. Aside from offering the best price of less than $8, you can also purchase an additional 2 years of protection for just $1.

The CH Hanson 03040 Magnetic Stud Finder is one of the most compact, effective, and affordable magnetic stud finders on the market today. If you want to mount an object to a wall that is less than 1 ½ inches wide, then we can’t recommend this product enough.

Don’t miss out on regular updates, contests and giveaways - Sign up to our Newsletter today!